The path taken less often than I should,
This tranquil track through a nearby wood.
A spot with trees for walls
Where sunlight through the branches falls.
An oasis from the urban din
I find a quiet place within.
An inner space where the heart can be still,
A peaceful spot on this wooded hill.
The path to the road ascends.
A cloud of gloom on me descends.
I must return to this rented land
Where advertising hoardings stand.
A world where empty vessels make most noise,
And people play with broken toys.

“The Path Through the Wood” can be found in my collection, “Lost in the Labyrinth of My Mind”, which is available in the Amazon Kindle store, https://www.amazon.com/Lost-labyrinth-my-mind-Morris-ebook/dp/B01AF5EPVY/. 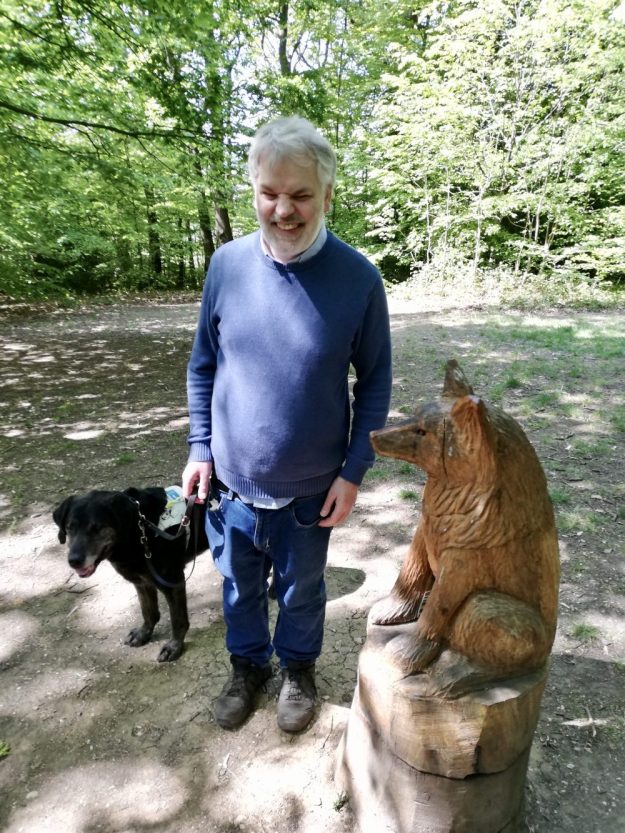 The poem was inspired by my walks through Spa Woods, an ancient area of woodland which I am lucky enough to have very close to my home. You can find out about Spa Woods here, https://en.wikipedia.org/wiki/Spa_Wood. 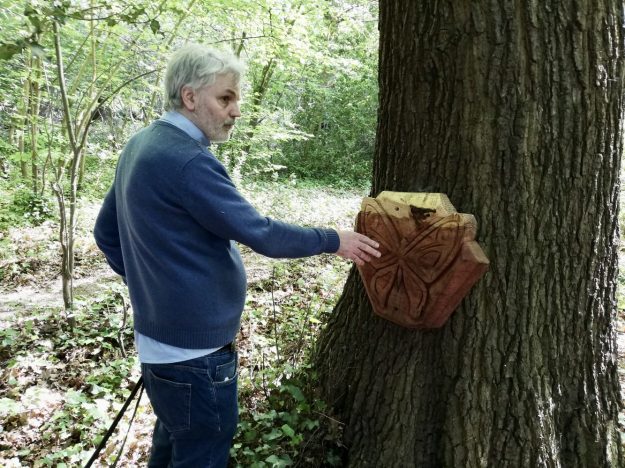 The photographs show wooden sculptures in the woods

On 23 August 2019, I announced that my “Selected Poems” is available for purchase in the Amazon Kindle store, https://kmorrispoet.com/2019/08/23/my-selected-poems-is-now-available-for-purchase-in-the-kindle-store/. And soon afterwards my book became available in paperback.

Yesterday (14 November), I received an email from the Royal National Institute of Blind People (RNIB) informing me that “The Selected Poems of K Morris” will be available in braille in the next couple of weeks. As someone who is registered blind and unable to read print, I am, of course delighted that I will soon own a braille copy of my book, and that other braille users will be able to read my “Selected Poems”.

2 previous collections of mine, (“Lost in the Labyrinth of My Mind” and “My Old Clock I Wind”) are also available to purchase in both Kindle and braille formats. For “Lost” please visit https://kmorrispoet.com/2017/07/21/lost-in-the-labyrinth-of-my-mind-is-available-to-purchase-in-braille-from-rnib/, and for “my Old Clock” please go to https://kmorrispoet.com/2017/08/09/my-old-clock-i-wind-and-other-poems-is-available-in-braille-from-rnib/.

As a child, I learned to read braille from an early age and still own quite a braille library, ranging from “The New Oxford Book of English Verse” to Poe’s “Tales of Mystery and Imagination”. I am pleased that “My Selected Poems” will soon join my collection of books in braille.

For anyone unfamiliar with braille and who is interested in learning more, you can do so by visiting this link, https://www.rnib.org.uk/braille-and-other-tactile-codes-portal-braille-past-present-and-future/invention-braille.

This morning, I popped out for breakfast. As I was in the process of leaving the pub, a gentleman acosted me and asked, “are you the guy who writes poetry?” somewhat surprised, I replied in the affirmative. He then proceeded to relate how he had bought 2 of my books in the local bookstore as a birthday present for his sister, and how much she had enjoyed reading them. Naturally I thanked him for having purchased my books, expressed pleasure that his sister had enjoyed reading them, and left the pub with a feeling of happiness at the thought that a reader had derived enjoyment from my work. 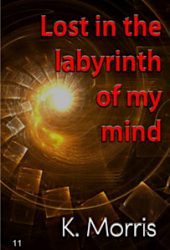 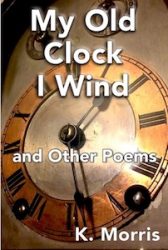 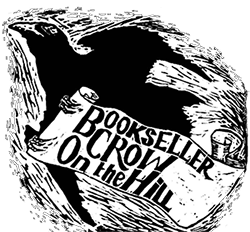 Whilst I have received many lovely comments on this website regarding my poetry, and compliments from family and friends concerning my books, its a rare treat to receive a compliment from a stranger. So via this post I would like to take the opportunity to thank the gentleman who purchased my books and, of course his sister for reading “Lost” and “My Old Clock”. I am delighted that she derived pleasure from my poetry. 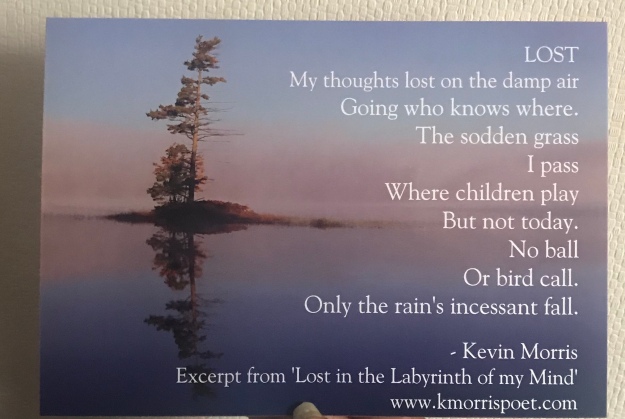 The above photograph shows my poem ‘Lost’. The text reads:

‘My thoughts lost on the damp air

Going who knows where.

Only the rain’s incessant fall.’

Excerpt from ‘Lost in the Labyrinth of my Mind’

Yesterday evening, a good friend was leafing through my collection of poems, “Lost in the Labyrinth of My Mind”. As she leafed through, she read aloud several of the poems, including the below piece, which is entitled “Labyrinth”,

“I hear the minotaur roar,

And see the vampire soar.

Lost in the labyrinth of my mind,

Can I a way out find,

Or must I remain in the land of the dead?

A place where the shadows forever fall,

And no birds call”.

I shall be taking a break from blogging for the next few days, and will return on Thursday 17th or Friday 18th April.

Lucifer came for a potentate bold.

He said “you have had power and wealth untold,

Now you must render me your immortal soul”.

“My soul it died,

you will find nothing inside.

It perished long ago,

Once I had ideals,

and yearned to build utopia in green fields.

I have waded in much blood,

And sacrificed the weak for the common good.

My soul you had long ago.

I take your hand,

When writing the above poem, I had in mind the famous quote of Lord Acton:
“Power tends to corrupt, and absolute power corrupts absolutely. Great men are almost always bad men.”

“The Potentate” can be found in my collection entitled “Lost In The Labyrinth Of My Mind”, http://moyhill.com/lost/. “Lost” can also be found in the Amazon Kindle store, https://www.amazon.com/dp/B01AF5EPVY/

I was delighted to receive the following comments, in an email entitled “A Poem That I Love”, from Lorraine Lewis, regarding my collection of poems “Lost In The Labyrinth Of My Mind”:

We just downloaded your book into a PDF Reader.

What a lovely book. Thank you Kevin. I just wanted to tell you that I LOVE the piem, “ ‘Ere We Die.” It is just what we have been talking about.

Your poetry is brilliant. I like it because it is not long and drawn out, and over wordy, but gives just something to think about. It is lovely. Thank you so much Kevin.

My thanks to Lorraine for granting me permission to reproduce her comments verbatim. Lorraine blogs at BlindWilderness (https://blindwilderness.wordpress.com).

You can find “Lost In The Labyrinth Of My Mind” here http://moyhill.com/lost/, and here https://www.amazon.com/dp/B01AF5EPVY

I have long been a lover of the traditional and, in particular the chiming clock. My love of clocks can be seen in a number of my poems, including “My Old Clock I Wind”, which can be found in “My Old Clock I Wind and Other Poems”. One derives a real sense of seconds passing (never to return) when listening to the ponderous tick tock of a traditional pendulum clock such as a Grandfather or Grandmother clock. As I put it in my poem “Time”, “the sickle chops and the heart will, one day, stop”.

Given my love of traditional clocks, I was sad to read an article in The Telegraph in which it is reported that analogue (traditional) clocks are being replaced in school examination halls by digital devices. As one headteacher puts it:

“Malcolm Trobe, deputy general secretary at the Association of School and College Leaders (ASCL), said youngsters have become accustomed to using digital devices.
“The current generation aren’t as good at reading the traditional clock face as older generations,” he told The Telegraph.
“They are used to seeing a digital representation of time on their phone, on their computer. Nearly everything they’ve got is digital so youngsters are just exposed to time being given digitally everywhere.” (See https://www.telegraph.co.uk/education/2018/04/24/schools-removing-analogue-clocks-exam-halls-teenagers-unable/).

I remember the excitement, as a schoolboy when a large digital clock was installed in the newly constructed school building which formed a part of the Royal School for the Blind in Liverpool, (one of the schools I attended in that great city). While other children thought the device wonderful, I was left cold and would retreat to the traditional wall mounted (pendulum) clock in another (older) part of the same school.

I can, of course see the advantages of digital devices. But, to me they lack (and always will lack) that elusive thing we call character.

(You can find “My Old Clock I Wind and Other Poems” in the Amazon Kindle Store. “Time” can be found in my collection “Lost In The Labyrinth of My Mind”, which is also available in the Kindle store. Links to all of my books can be found here, https://newauthoronline.com/about/). 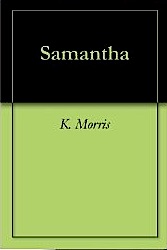 From Tuesday 3rd – Saturday 7th of April, my book ‘Samantha‘ will be available for free download on Amazon UK and Amazon US.

‘Samantha’ tells a story of a young girl forced into prostitution in the city of Liverpool. Can Sam’s love for Peter, a man she meets in a nightclub, save her? Or will Sam end her life in the murky waters of Liverpool’s Albert Dock? 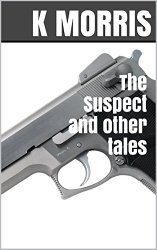 From Saturday 7th – Wednesday 11th of April, my book ‘The Suspect and other tales‘ will also be available for free download on Amazon UK and Amazon US.

‘The Suspect and other tales’ contains stories of the unexpected, ranging from tales of crime and vengeance, through to ghostly happenings in an ancient mansion.

My latest collection of poetry, ‘My old clock I wind and other poems’ is also available on Amazon and can be found on both Amazon UK and Amazon US.

‘My old clock I wind and other poems’ is a collection of 74 new and original poems. It contains both melancholy and more cheerful pieces contrasting the fact that We can enjoy life – but at the same time cannot escape its inevitable end.

We laugh
As we pass
Along life’s path.
There are tears too
It’s true,
For me and you
My friend,
For every year
Must have it’s end.

My previous collection of poetry ‘Lost in the labyrinth of my mind’ is also available on Amazon UK as well as Amazon US.

‘Lost in the labyrinth of my mind‘ is a collection of poems about nature, love, and life in general. 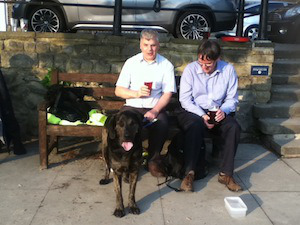 Below is a recording of me reading my poem “The Path Through The Woods”.

“The Path Through The Woods” was inspired by the many walks I have taken, in company with my guide dogs, through the woods which form part of The Lawns, parkland situated in the Upper Norwood area of south-east London http://www.parksandgardens.org/places-and-people/site/8113?preview=1.