A spirited defence of the use of the word “said”, for which I have considerable sympathy, https://theimaginativeconservative.org/2019/10/literary-value-ten-cent-word-maura-roan-mckeegan.html.

Whilst it is, of course, good practice to use alternative words for “said” where appropriate, in many instances this simple, 4 letter word is the best choice for writers.

As always, I would be interested in the views of my readers. 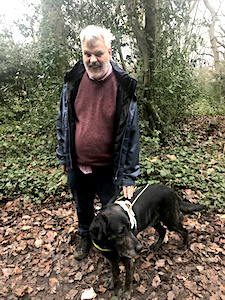 People come to my blog either because they like my poetry, or due to a post on a subject of interest to them catching their attention. Most of those clicking on this site are unaware of the fact that I am registered blind (unless they click on my “About page and see a photograph of me with my guide dog, Trigger, or they come across one of the few posts in which I talk about my visual impairment).

Not being aware of my blindness means that my readers interact with me as they would with anyone else (which is, of course as it should be for I am not defined by my visual impairment). However, when I meet people in the real (off-line world) I do come across individuals who are unsure how to interact with a visually impaired person, indeed some people are downright embarrassed.

A few days back, I came across this excellent post on “Life of a Blind Girl”, https://lifeofablindgirl.com/2019/06/02/the-dos-and-donts-when-interacting-with-a-blind-or-visually-impaired-person/, in which the author talks about the dos and donts of interacting with someone who is blind or visually impaired. In essence, as the author states, one should interact with a blind or visually impaired person in the same way in which one would interact with anyone else.

However (as the blogger points out) many people do not follow this simple rule. Examples of the behaviour identified by the author (and experienced by myself) include: speaking to the non-visually impaired companion of the blind person rather than addressing the visually impaired person directly, asking personal questions one would not address to a non-disabled person and being afraid of using commonly utilised language such as “see you later”.

In terms of the latter, I have lost count of the number of occasions on which someone has said “see you around” only to apologise to me for using visual language!

As someone who is blind, I use such language all the time and I don’t expect people to avoid utilising it when interacting with me. In fact by employing such language people demonstrate that they regard me (and other blind/visually impaired people) as individuals who are not defined by our disability.

There are too many self-appointed spokesmen who claim to speak on behalf of the visually impaired (and, I would add other groups), who say that one should not employ such and such language. Many of these people are well meaning (but wrong) while a few do, perhaps wish to use disability politics for their own unholy ends.

I commend this article to anyone who has ever felt unsure (or embarrassed) as regards interacting with a visually impaired or blind person.

“Check your privilege”, can not be said
To the dead,
But if it could, Kipling would
Remain the same,
A man of his time,
Who some would like to arraign
For the heinous crime
Of writing rhyme

“Don’t say its not expensive, unless you are going to buy it. I beg!”.

However, on giving the above further consideration, it struck me that we poets play with language all the time. In order to obtain a rhyme we express ourselves in ways that would be considered as odd where they to be used in our every day conversation. So, for example the poet will say
“The weather is drear
And none save my dog is near”.
While where he to express a similar sentiment in conversation with a friend, his use of language would more likely run along the following lines
“The weather is terrible, and I’m alone here, with only my dog for company”. But, of course the former would constitute poetry while the latter would not.

Perhaps the young lady I overheard yesterday is a budding poet. I hope so.

As I walked through the churchyard this morning, I passed by a teenager on her mobile. As I did so, I couldn’t help overhearing the following gem:

I wondered idly to myself, “how else would one run, other than by using one’s legs?”

To celebrate National Poetry Day, (which took place on 28 September), BBC local radio commissioned 12 poets from across England to write a poem incorporating a local word. To be frank some of these poems left me cold. I was, however rather taken with “Twittens”. To read the 12 poems please visit http://www.bbc.co.uk/programmes/articles/4jjwQBspBn4NLRyB53d0dnJ/national-poetry-day-free-the-word.

I have always been of the view,
That one should never write an essay,
When a sentence will do!

Please
Don’t call me “hon”.
Save it for the bees,
Who tease
The flowers on this beautiful July day.