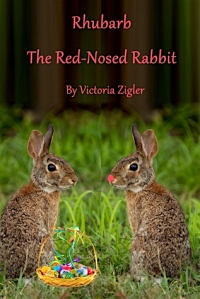 Everybunny has always teased Rhubarb because of his bright red nose, even though it’s not his fault he was born different. But when a misty night threatens to stop the Easter Bunny from making his yearly delivery of Easter eggs to the children of the world, Rhubarb’s red nose may be the only thing that can save Easter.”

Buy it from Smashwords

Buy it on iBooks

Buy it from Barnes & Noble

Buy it on Kobo

I have received the below, from my author friend, Victoria (Tori) Zigler, who’s books are enrolled in “Read An Ebook Week”. Please do check out Tori’s books.

“Some of my books are on sale this week as part of Smashwords Read An eBook Week.

Details of which ones I’ve enrolled, how much of a discount you’ll get, and what coupon codes to use, can be found HERE

Description:
“The adventures of Zeena and Saarik have already taken them through
the woods and up the mountains. Now they’re answering a plea for help
from a mermaid named Naia. With the help of both Naia’s magic and
Zeena’s own magic, the two friends head on an underwater quest to free
the water fairy, Lana, and make the ocean safe once more.”

The eBook version of “Zeena And The Mermaid” is now available from
Smashwords in all formats they offer, as well as from other eBook
retailers such as Barnes & Noble, Apple iBooks, and Kobo, among
others. The Smashwords link is
https://www.smashwords.com/books/view/611061

The paperback will become available at some point in the near future;
just as soon as it can be arranged.

“Zeena And The Dryad” and “Zeena And The Gryphon” – the first two
books in the series – are already available as both eBooks and
paperbacks. You can find the eBooks at the places mentioned above,
and find the paperbacks on CreateSpace, Amazon, and Barnes & Noble.

“The Light Of Dawn” by Victoria (Tori) Zigler is a highly enjoyable and thought provoking collection of poetry. The poems range from verse dealing with the passing of the seasons through to poems about the natural world and more humorous verses. In the latter category “The Finest Young Man From New York” made me smile as did the author’s other humorous poems.
As regards the more serious poems in this collection, Victoria’s “Time Stopped” particularly resonated with me,
“I swear this night won’t end
No Matter what I do.
I wish the time would change
Like I want it to”.
We have all, I believe been in the self-same situation of wishing that the clock would move on allowing us to leave a given situation, only to feel that time has become stuck and we must, forever remain trapped.
The author’s poem, “Appearance” also struck me. In “Appearance” she asks why people worry so much about how people look. Why indeed? Are there not far more important issues in the world we should concern ourselves with.
The collection contains several poems dealing with fairies. Children will love these as will adults with an interest in folk tales.
For “The Light Of Dawn” by Victoria Zigler please visit the following link, https://www.smashwords.com/books/view/291563.

Author Victoria (Tori) Zigler is offering a number of her books at a discounted price in the Smashwords Summer Sale. For details please see (http://ziglernews.blogspot.co.uk/2015/07/smashwords-summerwinter-sale-2015.html).

I am delighted to publish the below announcement from fellow author Victoria (Tori) Zigler regarding the availability of her books in print from Createspace:

“My name is Victoria Zigler, and I’m a blind author of children’s

In April 2012, I began publishing my books as eBooks via Smashwords,

who then distribute them to multiple eBook retailers, including – but

not limited to – Apple, Barnes & Noble, and Kobo.

Since then, I’ve received several requests to make my books available

I’m pleased to announce that I am finally able to grant these requests!

CreateSpace and Amazon, with the rest of my backlist of books

following as soon as it can be arranged.

The paperback versions will also be made available to request from

other retailers and bookstores, as well as from your local library,

though this will take a little longer to arrange.

already available to buy in paperback.

Many thanks to Victoria (Tori) Zigler for the below guest post. Tori’s latest book, Home Squeak Home comes out tomorrow (Wednesday 29 April 2015).

My book “Home Squeak Home” was inspired by two things: our gerbils, and some of my own books.

The “Kero’s World” series is a series of seven books that are semi-fictionalized accounts of the events in the life of my beloved Westie, who we lost in August 2014. They show his take on the events of his life: his walks, a vet trip, a couple of the big holidays, etc. I have a shorter series – this one with just two books – where events are shown from the point of view of my pet degus; in this case it’s just cage cleaning and Christmas.

I’m a big fan of animal stories myself, and I loved writing the stories; even the final “Kero’s World” book, which is a sort of sad story, and my way of saying goodbye to the real Kero. So, I wanted to include more of my pets in future stories. I mean, they say to write what you love, don’t they? Plus, I’ve had a lot of pets in the past, so I have plenty of characters to choose from; and some of them were real characters, let me tell you!

I decided to start with the gerbils, because, at the time I came up with this idea, they were the only pets I had who didn’t have their own book, since we either no longer had the others for various reasons, or – as in the case of my rats – hadn’t gotten them yet.

But the big question was: what kind of book should I make it? Another semi-fictionalized account? Or, perhaps, something entirely fictional this time, but just using the gerbils as characters? I also had to consider something else: regardless of whether it was semi-fictionalized, or complete fiction, I needed to figure out a topic.

After some thought, I decided I wanted to do a semi-fictionalized story. Even now I’m not sure why; it just felt like the right way to go.

So, what could I have the gerbils involved in? Cage cleaning? Nope! I did that with the degus, and the stories would be too similar. Celebrating Christmas? Maybe, if I found a different angle, but better not to just yet, since I have Christmas books for both Kero and the degus. A trip to the vet? Again, maybe, but since I’d already done that for Kero, I’d need a new angle, and besides… Our gerbils have never been to the vet, though I could imagine how it would go as I’ve taken hamsters to the vet before, and I know what our gerbils are like. Anyway, you get the idea, I’m sure.

I’ve seen several books where a child gets a new pet, and you see that child learning to care for it. But what I was interested in was the pet itself. How does the pet feel when it leaves its family, and finds itself in a strange place, surrounded by strangers? I think this has been explored with puppies, and possibly also with kittens, but what about gerbils?

I took a look around, and nothing immediately jumped out at me to say it had already been done; the gerbil books I could find seemed to be either factual care guides, or fictional stories about adventures gerbils have had while on the loose. So, I started writing; taking in to consideration what I’ve learned about our gerbils’ personalities in the time we’ve had them.

In the first draft I used their real names, but I decided not to do this for the final draft, so changed them during the second draft. My reason for doing this is to avoid potential complications with copyright issues. You see, the gerbils’ real names are Bilbo and Baggins; names any fan of JRR Tolkien would immediately recognize. If they’d had names that weren’t so obviously taken from a specific author’s work, then I wouldn’t have worried about it, but since their names are instantly recognizable as being those of the main character in “The Hobbit” – and aren’t really the kind of names that might appear elsewhere just by accident; not with the popularity of JRR Tolkien’s books – I decided a name change was my safest bet, and they became Sooty and Scamp.

Will there be any more books about the gerbils? I don’t think so; I have no plans to do more, anyway. But there will be plenty more animal stories where my other past and present pets will make an appearance. Some of these may be semi-fictionalized, but I expect most of them will be stories that are complete fiction; with the exception of the fact the main characters will be based on my pets, named after them, and carry their personalities.

Victoria Zigler is a blind author of children’s fiction and poetry. She has a very vivid imagination, and spends a lot of time in fictional worlds; some created by her, others created by other authors. When she remembers to spend some time in the real world, it’s mostly to spend time with her hubby and pets, though sometimes to indulge in other interests such as doing crafts, listening to music, watching movies, playing the odd figure game or roleplaying game, and doing a little cooking and baking. Tori was born in the shadow of the Black Mountains in Wales, UK, has been writing since she knew how, and became a self-published author in 2012. To date she has published 6 poetry books, 33 children’s books, and a fantasy story in a sci-fi and fantasy anthology, with plenty more planned for the near future.

Her books can be found on Smashwords, Barnes & Noble, Kobo, iBooks, and a few other eBook retailers that Smashwords distributes to.