My thanks to Aurora for featuring me on Writer’s Treasure Chest. 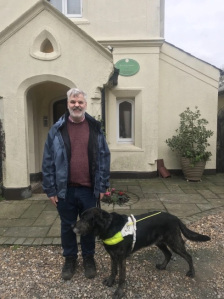 Having attended Saint Vincents School for the Blind in Liverpool, and the Royal National College for the Blind in Hereford, I went on to read history and politics at University College of Swansea.

Having graduated with a BA (joint honours) in history and politics, and an MA in political theory, I moved to London in 1994 where I now live and work.

Being blind and unable to read print, I use software called Job Access with Speech (JAWS) which converts text into speech and braille, enabling me to use a Windows laptop. All of my poems are written using JAWS.

When did you start writing?

I began writing seriously in 2012-2013, although I do remember composing a poem entitled “The Snake” whilst at school in Liverpool. I recollect that it began, “slithering through…